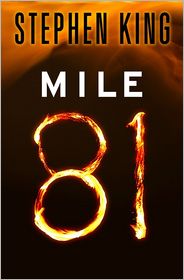 I don’t know exactly what King was going for here. At the end, he throws out a dedication to a few people who supported his earlier work, so I’m guessing he was going on nostalgia?

This thing reads like a really bad B-movie. Not in a good way. I could’ve done without the blatant and unnecessary plug for AT&T wireless internet. Also, all the mentioning of an ongoing series that he’s working on (American Vampire) and a film adaptation from his previous work (Christine) was kind of distracting and pulled me out of the story.

I don’t know what I expected. I loved Blockade Billy (his short story I read last summer).. but this just bothered me way too much.

Posted on September 14, 2011, in books. Bookmark the permalink. Leave a comment.